Betta fish is also named as Siamese fighting fish. Betta is a vibrantly-colored fish which is often seen swimming alone in the ornamental vases at your living places, offices or home. The Betta fish was found in Southeast Asia. The Betta fish have flashy colors i.e. they have all the colors of the rainbow, long fins that flow around them like underwater gowns and iridescent scales. Bettas are famous as the fighting fish in history as they have a very aggressive nature. They make their home in drainage ditches, rice paddies and the warm flood plains of the region, they became accustomed to devastating droughts and frequent storm flooding. 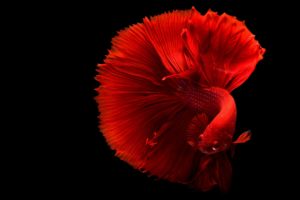 The cyclic changes in the environment of the betta fish help them to become a true labyrinth fish. A labyrinth fish is the one who has a quality to breathe air directly from the air and they can also take in air through gills. Because of this ability, these fish can survive for short duration’s out of the water and can inhale oxygen directly from the surrounding air. Because of this ability, they can sustain themselves in oxygen deficient water. They also have the ability to tolerate poor water quality and small spaces. They can survive well even in the tank with a minimum of 2 gallons of water with the regular water changes.

Betta fish have always been used as fighting fish as they are highly aggressive in nature. Because of their beauty, they are widely sold as decorations or party favors. It is fun to watch  them. One of the misconceptions about betta fish is that this fish must be kept in the pot with no other fish, but this is not a fact. In real female betta can live with other companions were male betta fish will fight with other male fish in their tank. They can be singly placed within the company of the group of other species.

Another myth about Betta fish is that they can survive without feed in a tank with the complete ecosystem, which in the case of betta fish can be a vase and a plant. Betta is a tiny creature but such small pots cannot be a good home for your pet, as they may become dull lonely lives and eventually slow death because of starvation.

The betta fish can be classified into different types depending on their fin type, their color, and their pattern. The selective breeding of the betta fish comes up with a large variety of bettas that different in their patterns, different and beautiful fins and attractive colors but technically they all belong to the same species. There is so much varied betta fish that no even two bettas look like that they belong to the same species.

The half-moon fan-tailed betta fish is one of the most beautiful and low maintenance pets.

Why Do You Have a Betta Fish as Pet?

Betta fish are becoming one of the most popular pet fish in the world. They are intelligent enough that some of their owners feel the same way about these tiny pets as the owners of conventional pets like cats, dogs, etc. They give a high level of parental care to their young ones which shows their intelligence. They are even wise enough to play with you. Betta fish are even aware of their surroundings and tend to explore the environment around them, claim their personal areas and often they develop an amusing personality. They even learn about their human companions, their feeding time even they get excited when you get closer to their aquarium.

Betta fish are relatively easy to take care of and they can even live in a small space provided by you. You can even teach bettas tricks to do. Bettas come in a large variety of colors and fin types which make it attractive for everyone to have them as a pet. Bettas are the long-lived animal, on average they can live from 3 to 5 years or many even longer.

What is The Maximum Size of Betta Fish?

What is the average Life Span of Betta Fish?

The average lifespan of Betta fish is two to four years in captivity. While in wild they have even shorter lives as the water in which they are living is not regulated as a fish tank water, they are exposed to pollution which can destroy their food sources and plants, they are fighting fish and as they are exposed to other male betta fish more frequently which increases their chances of fighting, which increases their chances of dying earlier. In order to increase the life span of your betta fish, you need to follow a few things.