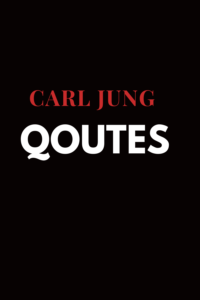 For better to come, good must stand aside. -Carl Jung

The most terrifying thing is to accept oneself completely. -Carl Jung

Thinking is difficult, that’s why most people judge.-Carl Jung

What you resist, persists. -Carl Jung

Words are animals, alive with a will of their own. -Carl Jung

We cannot change anything unless we accept it. -Carl Jung

There’s no coming to consciousness without pain. -Carl Jung

Show me a sane man and I will cure him for you. -Carl Jung

You are what you do, not what you say you’ll do. -Carl Jung

The privilege of a lifetime is to become who you truly are. -Carl Jung

I am not what happened to me, I am what I choose to become. -Carl Jung

Where wisdom reigns, there is no conflict between thinking and feeling. -Carl Jung

Wholeness is not achieved by cutting off a portion of one’s being, but by integration of the contraries. -Carl Jung

The creation of something new is not accomplished by the intellect but by the play instinct acting from inner necessity. The creative mind plays with the objects it loves. -Carl Jung

Often the hands will solve a mystery that the intellect has struggled with in vain. -Carl Jung

It all depends on how we look at things, and not on how things are in themselves. The least of things with a meaning is worth more in life than the greatest of things without it. -Carl Jung

Every form of addiction is bad, no matter whether the narcotic be alcohol, morphine or idealism. -Carl Jung

Your visions will become clear only when you can look into your own heart. Who looks outside, dreams; who looks inside, awakes. -Carl Jung

Everything that irritates us about others can lead us to an understanding of ourselves. -Carl Jung

Neurosis is always a substitute for legitimate suffering. -Carl Jung

The reason for evil in the world is that people are not able to tell their stories. -Carl Jung

Until you make the unconscious conscious, it will direct your life and you will call it fate. -Carl Jung

The healthy man does not torture others – generally it is the tortured who turn into torturers. -Carl Jung

Nothing has a stronger influence psychologically on their environment and especially on their children than the unlived life of the parent. -Carl Jung

Midlife is the time to let go of an overdominant ego and to contemplate the deeper significance of human existence. -Carl Jung

Intuition does not denote something contrary to reason, but something outside of the province of reason. -Carl Jung

The shoe that fits one person pinches another; there is no recipe for living that suits all cases. -Carl Jung

The highest, most decisive experience is to be alone with one’s own self. You must be alone to find out what supports you, when you find that you can not support yourself. Only this experience can give you an indestructible foundation. -Carl Jung

Faith, hope, love, and insight are the highest achievements of human effort. They are found -given- by experience. -Carl Jung

The greatest tragedy of the family is the unlived lives of the parents. -Carl Jung

Where love rules, there is no will to power, and where power predominates, love is lacking. The one is the shadow of the other. -Carl Jung

The first half of life is devoted to forming a healthy ego, the second half is going inward and letting go of it. -Carl Jung

I shall not commit the fashionable stupidity of regarding everything I cannot explain as a fraud. -Carl Jung

If one does not understand a person, one tends to regard him as a fool. -Carl Jung

Children are educated by what the grown-up is and not by his talk.-Carl Jung

Knowing your own darkness is the best method for dealing with the darknesses of other people. -Carl Jung

Loneliness does not come from having no people about one, but from being unable to communicate the things that seem important to oneself, or from holding certain views which others find inadmissible. -Carl Jung

In each of us there is another whom we do not know. -Carl Jung

Whatever is rejected from the self, appears in the world as an event. -Carl Jung

The meeting of two personalities is like the contact of two chemical substances: if there is any reaction, both are transformed. -Carl Jung

The best political, social, and spiritual work we can do is to withdraw the projection of our shadow onto others. -Carl Jung

I am no longer alone with myself, and I can only artificially recall the scary and beautiful feeling of solitude. This is the shadow side of the fortune of love. -Carl Jung

Nobody can fall so low unless he has a great depth. If such a thing can happen to a man, it challenges his best and highest on the other side; that is to say, this depth corresponds to a potential height, and the blackest darkness to a hidden light. -Carl Jung

With a truly tragic delusion, these theologians fail to see that it is not a matter of proving the existence of the light, but of blind people who do not know that their eyes could see. It is high time we realized that it is pointless to praise the light and preach it if nobody can see it. It is much more needful to teach people the art of seeing. -Carl Jung

The majority of my patients consisted not of believers but of those who had lost their faith. -Carl Jung

There are as many nights as days, and the one is just as long as the other in the year’s course. Even a happy life cannot be without a measure of darkness, and the word ‘happy’ would lose its meaning if it were not balanced by sadness. -Carl Jung

Somewhere, right at the bottom of one’s own being, one generally does know where one should go and what one should do. But there are times when the clown we call “I” behaves in such a distracting fashion that the inner voice cannot make its presence felt. -Carl Jung

To find out what is truly individual in ourselves, profound reflection is needed; and suddenly we realize how uncommonly difficult the discovery of individuality is. -Carl Jung

If we feel our way into the human secrets of the sick person, the madness also reveals its system, and we recognize in the mental illness merely an exceptional reaction to emotional problems which are not strange to us. -Carl Jung