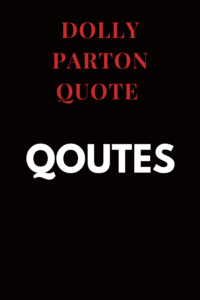 It’s a good thing I was born a girl, otherwise I’d be a drag queen. Dolly Parton

If I see something sagging, bagging or dragging I’ll get it nipped, tucked or sucked. Dolly Parton

Find out who you are. And do it on purpose. Dolly Parton

You can be rich in spirit, kindness, love and all those things that you can’t put a dollar sign on. Dolly Parton

When I wake up, I expect things to be good. If they’re not, then I try to set about trying to make them as good as I can ’cause I know I’m gonna have to live that day anyway. So why not try to make the most of it if you can? Some days, they pan out a little better than others, but you still gotta always just try. Dolly Parton

I thank God for my failures. Maybe not at the time but after some reflection. I never feel like a failure just because something I tried has failed. Dolly Parton

If I hadn’t been a woman, I’d be a drag queen for sure. I like all that flair and I’d be dressing up in them high heels and putting on the big hair. I’d be like Ru Paul. Dolly Parton

You’d be surprised how much it costs to look this cheap! Dolly Parton

I walk tall; I got a tall attitude. Dolly Parton

When I’m inspired, I get excited because I can’t wait to see what I’ll come up with next. – Dolly Parton

My weaknesses have always been food and men – in that order. – Dolly Parton

I was the first woman to burn my bra – it took the fire department four days to put it out. Dolly Parton

Songwriting is my way of channeling my feelings and my thoughts. Not just mine, but the things I see, the people I care about. My head would explode if I didn’t get some of that stuff out. Dolly Parton

I’m not going to limit myself just because people won’t accept the fact that I can do something else. Dolly Parton

Being a star just means that you just find your own special place, and that you shine where you are. To me, that’s what being a star means. Dolly Parton

Every single diet I ever fell off of was because of potatoes and gravy of some sort. Dolly Parton

People make jokes about my bosoms, why don’t they look underneath the breasts at the heart? It’s obvious I’ve got big ones and if people want to assume they’re not mine, then let them. Dolly Parton

I look just like the girls next door… if you happen to live next door to an amusement park. Dolly Parton

I’ve always kinda been a little outcast myself, a little oddball, doin’ my thing, my own way. And it’s been hard for me to, to be accepted, certainly in the early years of my life. Dolly Parton

If you talk bad about country music, it’s like saying bad things about my momma. Them’s fightin’ words. Dolly Parton

People say I look so happy – and I say, ‘That’s the Botox.’ Dolly Parton

You gotta keep trying to find your niche and trying to fit into whatever slot that’s left for you or to make one of your own. Dolly Parton

I just don’t feel like I have to explain myself. Dolly Parton

I’m old enough and cranky enough now that if someone tried to tell me what to do, I’d tell them where to put it. Dolly Parton

I don’t have maids or servants, and my husband and I love waking up early and going to the 24-hour supermarket when there is nobody else there. Dolly Parton

A lot of people don’t realise I came out of the Smoky Mountains with a load of songs. Dolly Parton

I feel that sin and evil are the negative part of you, and I think it’s like a battery: you’ve got to have the negative and the positive in order to be a complete person. Dolly Parton

Dollywood is a family park, and all families are welcome. We do have a policy about profanity or controversial messages on clothing or signs. It is to protect the individual wearing or carrying them, as well as to keep down fights or problems by those opposed to it at the park. Dolly Parton

The secret to a long marriage is to stay gone. Dolly Parton

God and I have a great relationship, but we both see other people. Dolly Parton

I hated school. Even to this day, when I see a school bus it’s just depressing to me. The poor little kids. Dolly Parton

You know, I look like a woman but I think like a man. And in this world of business, that has helped me a lot. Because by the time they think that I don’t know what’s goin’ on, I then got the money, and gone. Dolly Parton

Adjusting to the passage of time, I think, is a key to success and to life: just being able to roll with the punches. Dolly Parton

We’re all just a bunch of sinners, but we do the best we can. Dolly Parton

The only way I’d be caught without makeup is if my radio fell in the bathtub while I was taking a bath and electrocuted me and I was in between makeup at home. I hope my husband would slap a little lipstick on me before he took me to the morgue. Dolly Parton

Funny thing is that the poorer people are, the more generous they seem to be. Dolly Parton

I was born with a happy heart, and I try to keep a good attitude. It’s not true that I’m happy all the time because nobody is, and we all go through our things. Dolly Parton

I still close my eyes and go home – I can always draw from that. Dolly Parton

After momma gave birth to 12 of us kids, we put her up on a pedestal. It was mostly to keep Daddy away from her. Dolly Parton

When I was with Andy Warhol, I thought, ‘God, his wig looks cheaper than mine!’ Dolly Parton

There’s nothing like white trash at the White House. Dolly Parton

I’m working on my life story. I’m not decided if it’s going to be a musical or a movie with music in it. Dolly Parton

I wanted to write a book that talked about the emotions of children, which is the rainbow. We all have moods. We talk about being blue when we’re sad, and being yellow when we’re cowards, and when we’re mad, we’re red. Dolly Parton

Of course, ‘I Will Always Love You’ is the biggest song so far in my career. I’m famous for several, but that one has been recorded by more people and made me more money, I think, than all of them. But that song did come from a true and deep place in my heart. Dolly Parton

I’ve used my femininity and my sexuality as a weapon and a tool… but that’s just natural. Dolly Parton

When I’m home, I spend Sunday with my husband. If we’re not cooking, we travel around in our camper, stop at fast-food restaurants, and picnic. We love that stuff that will harden your arteries in a hurry. Dolly Parton