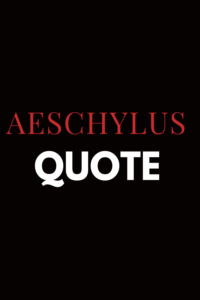 He who learns must suffer. And even in our sleep pain that cannot forget falls drop by drop upon the heart, and in our own despair, against our will, comes wisdom to us by the awful grace of God- Aeschylus

From a small seed a mighty trunk may grow- Aeschylus

Memory is the mother of all wisdom- Aeschylus

I have learned to hate all traitors, and there is no disease that I spit on more than treachery- Aeschylus

It is not the oath that makes us believe the man, but the man the oath- Aeschylus

Bronze in the mirror of the form, wine of the mind- Aeschylus

Death is easier than a wretched life; and better never to have born than to live and fare badly- Aeschylus

The anvil of justice is planted firm, and fate who makes the sword does the forging in advance- Aeschylus

It is always in season for old men to learn- Aeschylus

Memory is the mother of all wisdom- Aeschylus

Whenever a man makes haste, God too hastens with him- Aeschylus

The man who does ill must suffer ill- Aeschylus

In the lack of judgment great harm arises, but one vote cast can set right a house- Aeschylus

Whoever is new to power is always harsh- Aeschylus

In every tyrant’s heart there springs in the end this poison, that he cannot trust a friend- Aeschylus

For the poison of hatred seated near the heart doubles the burden for the one who suffers the disease; he is burdened with his own sorrow, and groans on seeing another’s happiness- Aeschylus

What is there more kindly than the feeling between host and guest?- Aeschylus

It is not the oath that makes us believe the man, but the man the oath- Aeschylus

Search well and be wise, nor believe that self-willed pride will ever be better than good counsel- Aeschylus

Who, except the gods, can live time through forever without any pain?- Aeschylus

Words are the physicians of a mind diseased- Aeschylus

My friends, whoever has had experience of evils knows how whenever a flood of ills comes upon mortals, a man fears everything; but whenever a divine force cheers on our voyage, then we believe that the same fate will always blow fair- Aeschylus

I, schooled in misery, know many purifying rites, and I know where speech is proper and where silence- Aeschylus

What exists outside is a man’s concern; let no woman give advice; and do no mischief within doors- Aeschylus

For there is no defense for a man who, in the excess of his wealth, has kicked the great altar of Justice out of sight- Aeschylus

Of prosperity mortals can never have enough- Aeschylus

Since long I’ve held silence a remedy for harm- Aeschylus

To mourn and bewail your ill-fortune, when you will gain a tear from those who listen, this is worth the trouble- Aeschylus

And though all streams flow from a single course to cleanse the blood from polluted hand, they hasten on their course in vain- Aeschylus

There is no disgrace in an enemy suffering ill at an enemy’s hand, when you hate mutually- Aeschylus

For somehow this disease inheres in tyranny, never to trust one’s friends- Aeschylus

We shall perish by guile just as we slew- Aeschylus

The words of truth are simple- Aeschylus