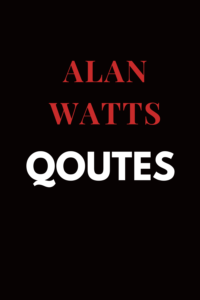 The only way to make sense out of change is to plunge into it, move with it, and join the dance- Alan Watts

To have faith is to trust yourself to the water. When you swim you don’t grab hold of the water, because if you do you will sink and drown. Instead you relax, and float- Alan Watts

But the attitude of faith is to let go, and become open to truth, whatever it might turn out to be- Alan Watts

So then, the relationship of self to other is the complete realization that loving yourself is impossible without loving everything defined as other than yourself- Alan Watts

In other words, a person who is fanatic in matters of religion, and clings to certain ideas about the nature of God and the universe, becomes a person who has no faith at all- Alan Watts

The reason we have poverty is that we have no imagination. There are a great many people accumulating what they think is vast wealth, but it’s only money… they don’t know how to enjoy it, because they have no imagination- Alan Watts

Omnipotence is not knowing how everything is done; it’s just doing it- Alan Watts

And although our bodies are bounded with skin, and we can differentiate between outside and inside, they cannot exist except in a certain kind of natural environment- Alan Watts

Zen does not confuse spirituality with thinking about God while one is peeling potatoes. Zen spirituality is just to peel the potatoes-Alan Watts

But I’ll tell you what hermits realize. If you go off into a far, far forest and get very quiet, you’ll come to understand that you’re connected with everything- Alan Watts

How is it possible that a being with such sensitive jewels as the eyes, such enchanted musical instruments as the ears, and such fabulous arabesque of nerves as the brain can experience itself anything less than a god- Alan Watts

So the bodhisattva saves all beings, not by preaching sermons to them, but by showing them that they are delivered, they are liberated, by the act of not being able to stop changing- Alan Watts

The style of God venerated in the church, mosque, or synagogue seems completely different from the style of the natural universe- Alan Watts

In known history, nobody has had such capacity for altering the universe than the people of the United States of America. And nobody has gone about it in such an aggressive way- Alan Watts

In other words, a person who is fanatic in matters of religion, and clings to certain ideas about the nature of God and the universe, becomes a person who has no faith at all- Alan Watts

The moralist is the person who tells people that they ought to be unselfish, when they still feel like egos, and his efforts are always and invariably futile- Alan Watts

Reality is only a Rorschach ink-blot, you know- Alan Watts

Some believe all that parents, tutors, and kindred believe. They take their principles by inheritance, and defend them as they would their estates, because they are born heirs to them- Alan Watts

Omnipotence is not knowing how everything is done; it’s just doing it- Alan Watts

Faith is a state of openness or trust-Alan Watts

We seldom realize, for example that our most private thoughts and emotions are not actually our own. For we think in terms of languages and images which we did not invent, but which were given to us by our society-Alan Watts

This is the real secret of life — to be completely engaged with what you are doing in the here and now. And instead of calling it work, realize it is play- Alan Watts

The meaning of life is just to be alive. It is so plain and so obvious and so simple. And yet, everybody rushes around in a great panic as if it were necessary to achieve something beyond themselves-Alan Watts

To have faith is to trust yourself to the water. When you swim you don’t grab hold of the water, because if you do you will sink and drown. Instead you relax, and float-Alan Watts

Advice? I don’t have advice. Stop aspiring and start writing. If you’re writing, you’re a writer. Write like you’re a goddamn death row inmate and the governor is out of the country and there’s no chance for a pardon. Write like you’re clinging to the edge of a cliff, white knuckles, on your last breath, and you’ve got just one last thing to say, like you’re a bird flying over us and you can see everything, and please, for God’s sake, tell us something that will save us from ourselves. Take a deep breath and tell us your deepest, darkest secret, so we can wipe our brow and know that we’re not alone. Write like you have a message from the king. Or don’t. Who knows, maybe you’re one of the lucky ones who doesn’t have to-Alan Watts

The only way to make sense out of change is to plunge into it, move with it, and join the dance -Alan Watts

The menu is not the meal-Alan Watts

Jesus Christ knew he was God. So wake up and find out eventually who you really are. In our culture, of course, they’ll say you’re crazy and you’re blasphemous, and they’ll either put you in jail or in a nut house (which is pretty much the same thing). However if you wake up in India and tell your friends and relations, ‘My goodness, I’ve just discovered that I’m God,’ they’ll laugh and say, ‘Oh, congratulations, at last you found out-Alan Watts

“The art of living… is neither careless drifting on the one hand nor fearful clinging to the past on the other. It consists in being sensitive to each moment, in regarding it as utterly new and unique, in having the mind open and wholly receptive.”

We are living in a culture entirely hypnotized by the illusion of time, in which the so-called present moment is felt as nothing but an infintesimal hairline between an all-powerfully causative past and an absorbingly important future. We have no present. Our consciousness is almost completely preoccupied with memory and expectation. We do not realize that there never was, is, nor will be any other experience than present experience. We are therefore out of touch with reality. We confuse the world as talked about, described, and measured with the world which actually is. We are sick with a fascination for the useful tools of names and numbers, of symbols, signs, conceptions and ideas-Alan Watts

Tomorrow and plans for tomorrow can have no significance at all unless you are in full contact with the reality of the present, since it is in the present and only in the present that you live. There is no other reality than present reality, so that, even if one were to live for endless ages, to live for the future would be to miss the point everlastingly-Alan Watts

We do not “come into” this world; we come out of it, as leaves from a tree. As the ocean “waves,” the universe “peoples.” Every individual is an expression of the whole realm of nature, a unique action of the total universe-Alan Watts

What we have forgotten is that thoughts and words are conventions, and that it is fatal to take conventions too seriously. A convention is a social convenience, as, for example, money … but it is absurd to take money too seriously, to confuse it with real wealth … In somewhat the same way, thoughts, ideas and words are “coins” for real things-Alan Watts

I have realized that the past and future are real illusions, that they exist in the present, which is what there is and all there is- Alan Watts

But I’ll tell you what hermits realize. If you go off into a far, far forest and get very quiet, you’ll come to understand that you’re connected with everything- Alan Watts